The latest Chrome Canary build has got support for Fetch API which is aimed to be the modern, simpler and advanced replacement of XMLHttpRequest object. Once the window.fetch API becomes a regular feature of leading web browsers, developers can start using this powerful tool in production.

To test working of the window.fetch in latest Chrome canary build, you can play with this sample code by Googler Addy Osmani. You need to enable the Chrome flag “Experimental Web Platform features” from chrome://flags page. 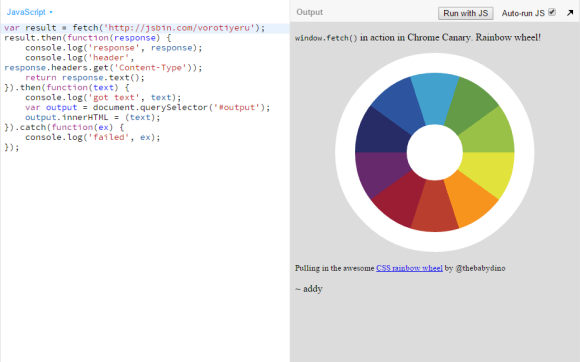 Interested developers should take a look on the API documentations available here.

Apart from Google, other vendors are also working on implementing Fetch API in their browsers. Mozilla Firefox nightly builds would start supporting window.fetch really soon. Moreover, Microsoft has listed Fetch API as “Under Consideration” on its modern.IE portal.

Alternatively, one can use Fetch polyfill to start using Fetch API right now, without waiting for native implementation in web browsers.