UC Browser has been released for the feature phone operating system KaiOS. It is now available on KaiStore, the official app store of KaiOS.

The KaiOS is a fork of Mozilla’s FirefoxOS, which has been discontinued by Mozilla now. KaiOS is optimized for low-end affordable feature phones. It claims to have presence in more than 100 international markets and over 100 million global device shipments. 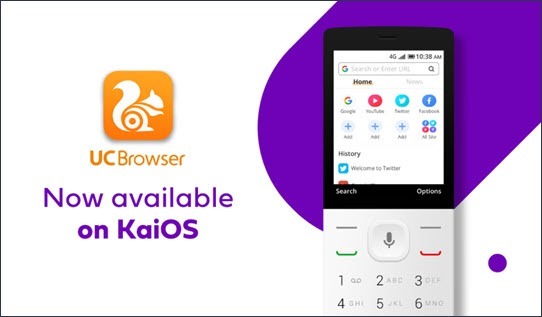 It is worth mentioning that the UC Browser is currently not available on popular JioPhone devices running on KaiOS, as the KaiStore is not installed on these feature phones. JioPhone devices are cheap feature phones offered by India’s biggest telecom operator Reliance Jio. There are two variants of JioPhone available in the market, and both support 4G LTE connectivity with subscription plans starting from INR 49 per month (less than USD 1). Jio has provided its own JioStore app store on JioPhones, where many popular apps are available including Google Assistant, WhatsApp, YouTube and Facebook. We believe that the UC Browser would arrive soon on JioPhone.

Arpit maintains several browser-based tools including many popular extensions. Follow him on Twitter, or email at editor@browsernative.com.
Article published on October 30, 2019, Last updated on May 16, 2020.