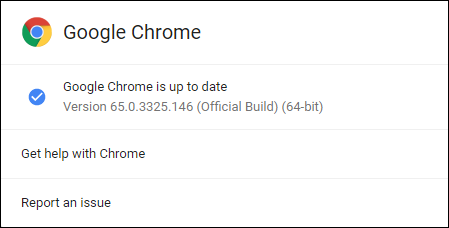 Users should be aware that the Google Chrome updates automatically in background, without requiring any manual action from their side. This automagic update is one of the best features of Chrome. But several malicious apps, websites and advertisers trick users for urgent chrome update. Unfortunately, many users fall for this trick, and end up installing unwanted spammy adware programs on their computer. This practice is very common on Android platform as well.

To check current version of your Chrome installation or manually check for update, visit Chrome menu > Settings > About Google Chrome. Alternatively, one can enter chrome://settings/help in the address bar, which should load the same settings page.

In short, Chrome 65 has got Local Overrides, new performance and SEO audits in the Lighthouse (the built-in Audit tool of Chrome DevTools), new Changes tab to track changes made locally in DevTools etc. The new SEO audit tool checks webpages for certain specific SEO guidelines, and helps webmasters to ensure that their webpages are optimized for search engine results ranking.

Arpit maintains several browser-based tools including many popular extensions. Follow him on Twitter, or email at editor@browsernative.com.
Article published on March 7, 2018, Last updated on April 25, 2018.