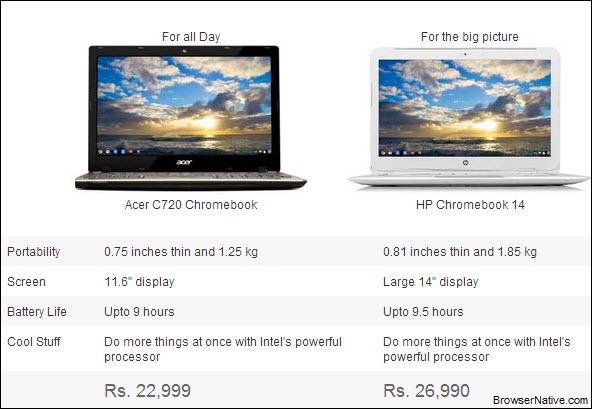 A Chromebook is totally different from other laptops, as it is built around Google’s Chrome browser. You can imagine it to be a usual laptop running on Windows, where one can use just the Chrome browser. There are several online and offline apps and extensions available for Chrome and Chromebooks, but it is not going to replace a regular laptop. If you primarily use your laptop for browsing the web and using the web-based apps, Chromebook may be the right choice for you. There are several advantages of Chromebooks, like its operating system, the Chrome OS, updates itself automatically in background, similar to the Chrome browser on other platforms.

If you have to choose one out of the Acer C270 and the HP Chromebook 14 models, we would recommend the later one. The HP Chromebook 14 has larger 14” display with 1366 x 768 screen resolution. It has 4 GB DDR3 RAM and 4 cell battery, while the Acer C270 has only 2GB RAM and 3 cell battery. Most of the other features are same for these devices including the Intel Celeron Dual Core 4th Generation processor. Acer 270 Chromebook is definitely easier-to-carry because of its smaller dimensions and weight.